An care manager who was so ashamed by her obesity that she only went to the supermarket after dark told how she shed nearly 8st – shrinking from a size 24 to a 10 – after being forced to use a seatbelt extension to fly.

Mother-of-four Leanne Wrathall, 36, of Harlow, Essex, said her life was ruined by her weight, leaving her humiliated during nights out and so paranoid about attracting negative attention that she always made her husband fill up their car at the petrol station.

But Leanne, said her turning point came when she could not fasten an airline seatbelt over her belly, prompting her to join the 1:1 Diet by Cambridge Weight Plan – shedding 7st 10lb and making her a 10st 10lb, and a size 10 to 12.

Recalling how she felt ‘haunted’ by her massive belly, she said: ‘I’d wake up, put my hands on my stomach and think, “It’s still there”. 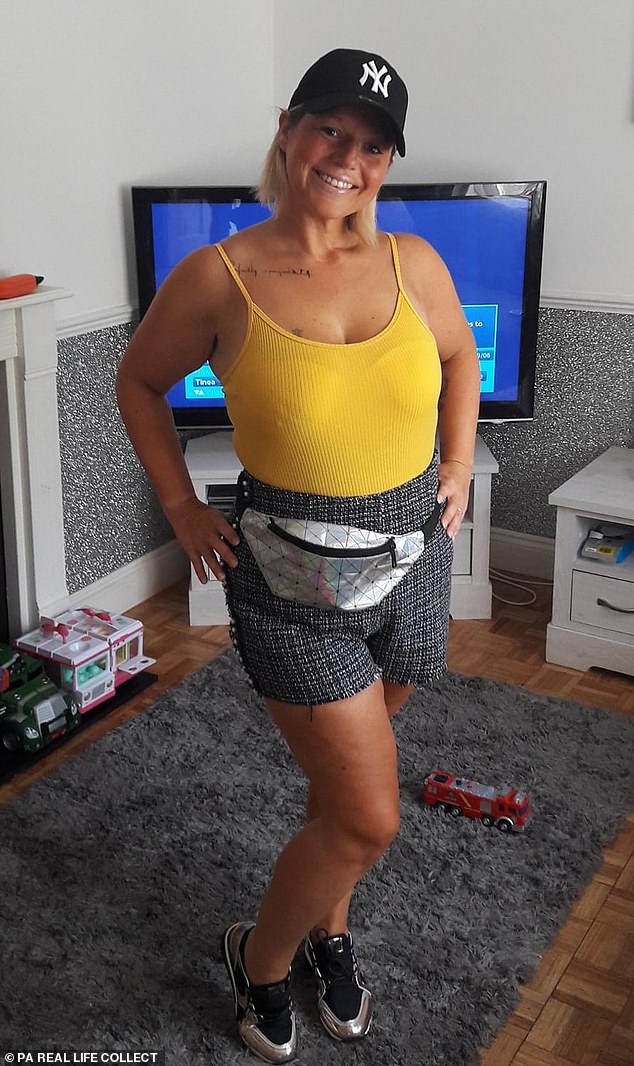 Mother-of-four Leanne Wrathall, 36, from Harlow, Essex, pictured after losing 8st, and going from a size 24 to a size 10 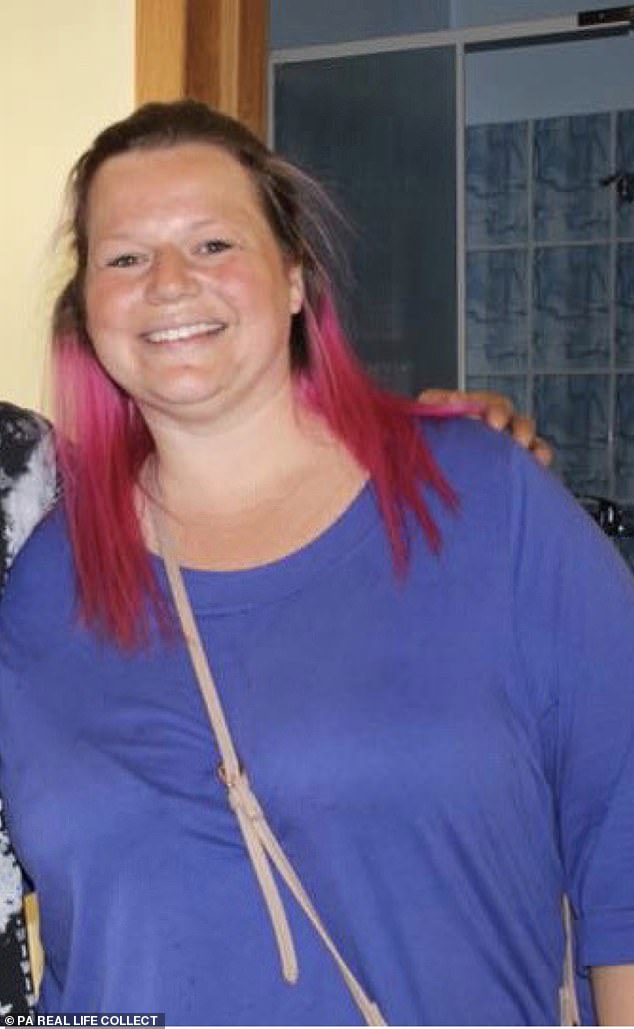 Pictured: Leanne before her weight loss. The mother-of-four explained the last straw had been to be forced to used a seat-belt extender on a flight to Romania in 2018

‘I couldn’t look at myself in the mirror. My husband would have to get out of the car to get petrol at the garage, because I was too worried that people were looking at me. They probably weren’t but in my head they were.

‘I would shop in the supermarket at night when there were less people there to see me, because I was so paranoid.

‘And if I put something in my shopping trolley, even if it was for my children, I worried that people were thinking, “She shouldn’t be eating that”.’

Describing herself as a comfort eater, Leanne – who had always been ‘on the bigger side’ – fell into bad habits, grabbing food whenever she could, because of the unsociable hours she worked as a care manager. 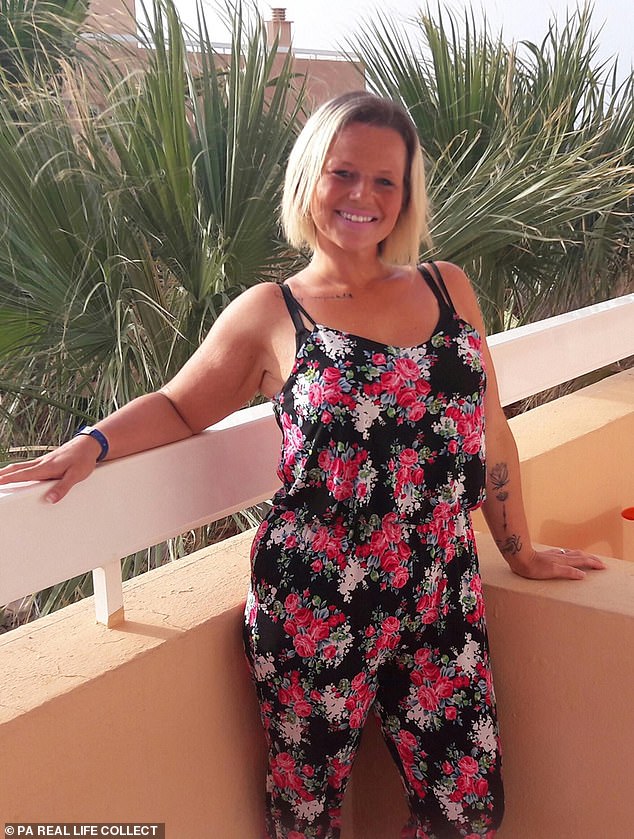 Leanne said she suffered years of humiliation on night outs due to her weight, and grew paranoid her large frame drew negative attention, to the point where she would not want to get our of her car, even to just fill it up at a petrol station (pictured after the weight loss)

Every time she tried to lose weight, managing to shed six stone for her wedding 11 years ago, she could not keep it off.

Leanne, who has four children, Teagan-Faye, 12, Hayden-Leigh, 10, Teddy, eight, and Xander, three, with her care worker husband, Darren, 38, said: ‘If I was having a good day, I would celebrate by eating and if I had a bad day or was stressed, I would treat food as my comfort blanket.

‘I realised I rarely ever ate because I was hungry. If I was out with friends or my kids, if they did not finish their meal, I would finish it for them.

‘Carbs were my downfall. I would eat a lot of pasta and convenience food, especially because of my work. I work long, unsociable hours and I would not have time to prepare dinner, so it would be pizza or a takeaway, then I’d go to sleep.

‘Sometimes I wouldn’t eat all day, then I would think, “Well, I can treat myself”.

‘I felt awful about it. It left me depressed. My weight would be the thing I thought about last thing at night and first thing when I woke up in the morning.’

Nights out also filled Leanne with dread weeks in advance, as she stressed about what to wear.

‘I’d have friends come to stay from abroad and I couldn’t bring myself to go on nights out with them, because of how I looked,’ she recalled.

‘If I did go out, I would sit in the corner, not even getting up to go to the toilet for the whole night. I would hold it in because I didn’t want to walk across the room in front of people.

‘I would stress for weeks if I had something coming up – especially if anyone asked me what I was going to wear. I could not talk about it and on the night itself, I would sit in my bedroom crying. 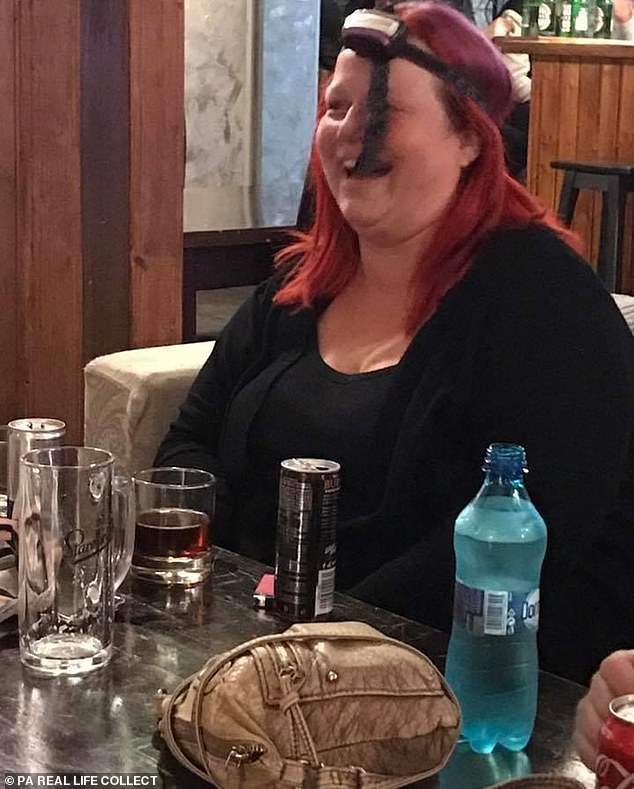 Leanne (pictured before) switched to a healthier diet, and started drinking three litres of water a day, starting at breakfast

‘I could not walk up the stairs without getting out of breath and I couldn’t play with the kids.

‘If my three-year-old was having fun in a soft play area, I wouldn’t join him, because I was worried about what I looked like.”

The final humiliation came for Leanne when she had to ask for a seat belt extender before take-off on a flight to Romania.

‘I travel to Romania quite a lot, as I volunteer with charities, so the turning point for me was at the beginning of 2018,’ she said.

‘I had to ask for a seat belt extender. I’d been stretching the seatbelt as far as I could and trying to hold in my stomach, but I simply couldn’t fasten it. It was so embarrassing. 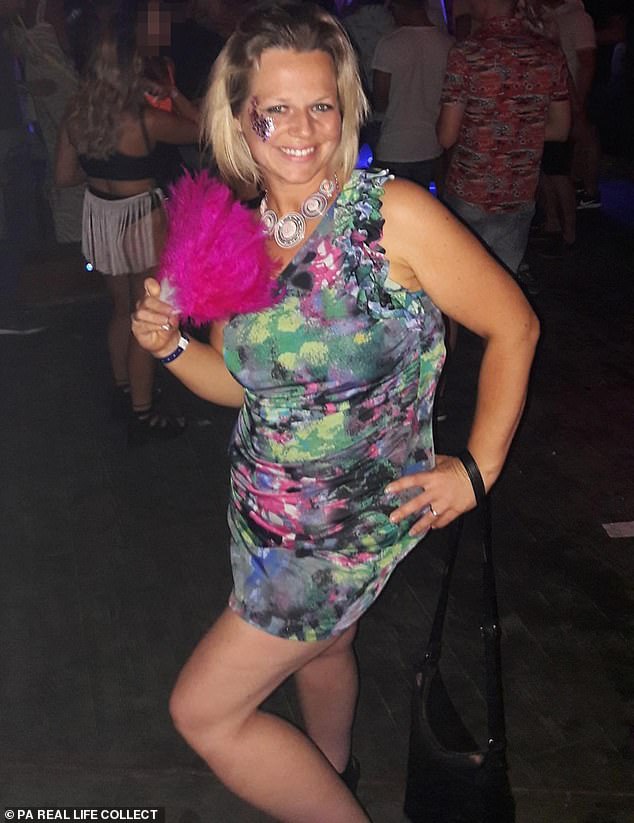 Leanne, who went on a holiday in Ibiza after her weight loss, said it was the best vacation she’s ever had (pictured now)

‘That was the moment when I finally knew I had to lose weight.’

Finding slimming groups intimidating, Leanne opted to follow the 1:1 Diet by Cambridge Weight Plan, where she met with her consultant Nikki one-on-one, rather than in a group.

Asked not to be told her starting weight, she only found out that she had reached 18st 6lb after she had lost three stone.

Swapping her usual junk food for shakes, porridge, snack bars and healthier meals like spaghetti Bolognese and cottage pie, the weight started to drop off.

‘I began to see results really quickly and every time I lost a stone, I would get a fridge magnet. Those fridge magnets felt like getting the Olympic gold medal,’ she laughed.

Leanne, pictured (left) during her weight loss, said she felt ashamed of her eating habits and hated people judging her in public. The mother-of-four said the weight loss as boosted her confidence, and she doesn’t dread going out anymore 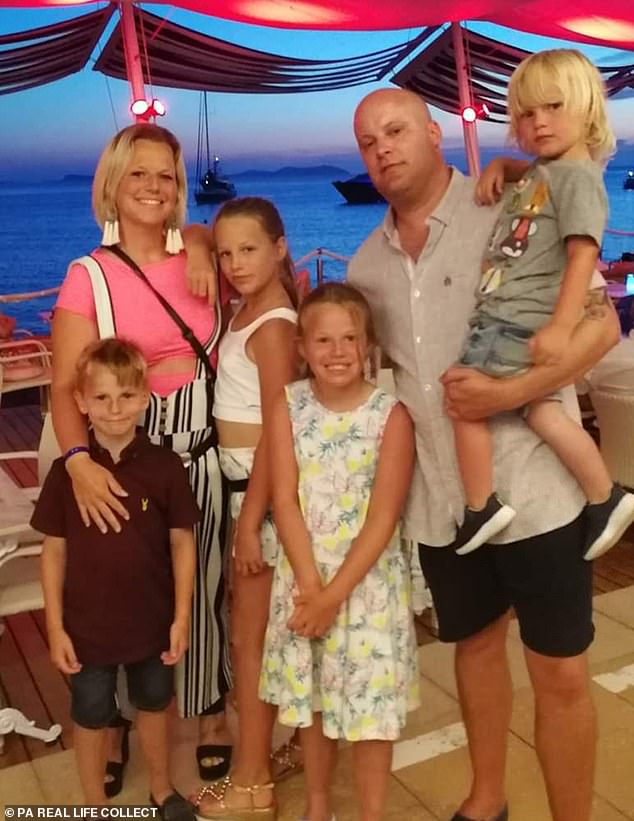 The mother-of-four, pictured with her children and husband Darren on a holiday, said her kids loved her new body (pictured: Leanne with Teddy, eight, Teagan-Faye, 12, ten, Hayden-Leigh, ten , Darren and Xander, three

‘If I went on holiday, I’d have a little break from the plan, but I found I would naturally pick the healthier options.

‘I love the food. I know it’s full of goodness and nutrients, and especially at the moment, I’m doing my best to keep healthy.

‘I also drink three litres of water a day.’

Dinner: Takeaway pizza, curry or picking at the kids’ dinner

Snacks: Toast, whatever is in the fridge

Leanne even started to exercise – doing a couple of cardio classes at the gym each week and taking part in charity runs – slimming down to 10st 10lb by October 2019.

‘Now I just feel content. I’m not saying I look in the mirror and say, ‘Wow, I look good,’ but I feel much more confident,’ she said.

‘I’m the first to suggest to my friends that we go to a concert, or meet up if there’s a DJ on in town,’ she said.

‘We went on holiday to Ibiza in June and it was the best holiday we’ve ever had. I just enjoyed it and because I was enjoying it, the kids had a great time too. I was in the swimming pool playing with them.

‘I bought a different bikini to wear every day for the whole two weeks. In fact, I bought 16, so a couple of times I had to change, because I was determined to wear every one of them – and I’d never worn a bikini before.

‘I stopped worrying what people were thinking and felt comfortable walking around the supermarket in daylight. 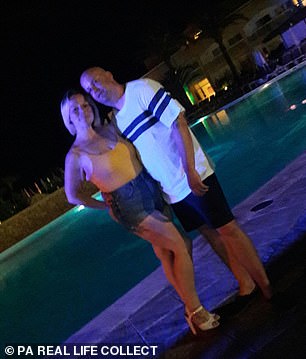 Leanne used to make her partner Darren (pictured) get things for her because she hated going out, bit now she’s the one suggesting outings

‘It takes a while for your brain to catch up with your body, so in my head I was not a size 10 and I’d still go and pick up a size 14.

Four people who have really benefited from Leanne’s weight loss are her children.

‘My kids love it,’ she said. ‘They used to play a game where they would measure my waist by hugging me. Now they can touch their hands around me, whereas when I was big, they couldn’t do that.

‘My consultant, Nikki, is fantastic. It’s not a quick fix, it’s a lifestyle change and she has been there for me every step of the way.

‘Now I want other obese people to stop being miserable by following in my footsteps and losing weight. If I can do it then anyone can.’