RHOC alum, Vicki Gunvalson certainly seems to be getting all her ducks in a row. Real Housewives of Orange County fans heard over the weekend that Vicki put up her home in Orange County for sale. She recently spent time in Puerto Vallarta, Mexico, decorating and putting in the finishing touches to her beachside condo. Now, it seems she looks at a healthier lifestyle. Taking to her Instagram Stories on Monday, she said that she’s starting the Whole30 Diet

RHOC – Vicki Gunvalson sells her home and thinks about her health

We reported that news came out over the weekend that Vicki put up her home for sale. She listed her house on the market for 3.35 million dollars. Apparently, she and Steve Lodge plan to split their time between California, North Carolina, and Puerto Vallarta. Steve already has family back in California. So, they expect to always maintain some sort of home in the area. It seems that part of her big break from Bravo’s Real Housewives of Orange County involves a totally new lifestyle. And, she also focuses on her health.

Taking to her Instagram Stories on Monday night, Vicki shared a card. It read, “started the whole30 day diet today. Day one down.” Then she asked, “Has anyone else done it and lost the whole 30 days?” In a second clip, Vicky said she heard so many good things about the diet. So, she prepared a breakfast dish that included coconut, pumpkin and other fruit. Actually, it looks really delicious. It looks like Vicki did a lot of research. And, she also shared many printed recipes that she found online. Organized, she hit the shops with her shopping list and got all the ingredients to last for a month. 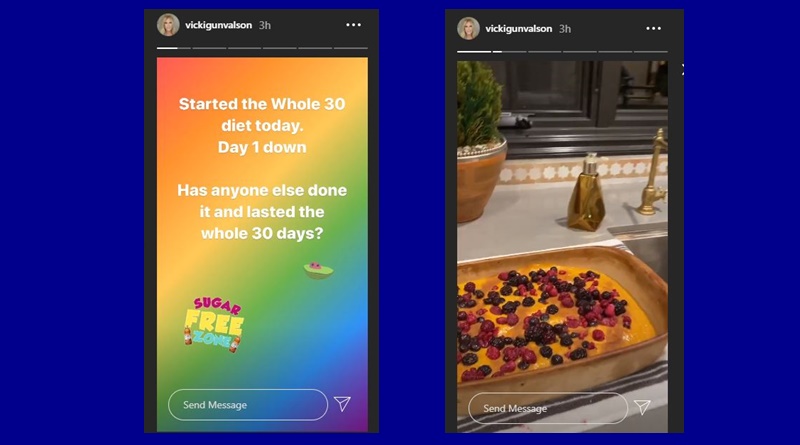 How does the diet work?

Certainly, the RHOC star looks like she’s slim already. Nevertheless, the diet’s about more than just losing weight. Healthline noted that it’s been trending since about 2017. Their website noted the diet started as a way to “reset your metabolism.” By eliminating certain foods it’s hoped that your body recovers from the “negative effects” of previous lifestyle choices. Many people rave about it claiming it brings many “health benefits.” Apparently after starting the diet, 30 days later, the RHOC star may reintroduce those dishes she missed.

The diet comes with a long list of food that you can eat and those foods that are off-limits. Fortunately for Vicki, it’s not all that complicated. No calorie-tracking or keeping those ghastly diet-counts are involved. Apparently, apart from fat-loss the diet also gives people “higher energy levels” and better sleep. Importantly, it seems to “reduce food cravings.” But if you enjoy a glass of wine, set that aside for the next month.

So, it looks like the RHOC alum puts aside alcohol completely for a while. But, it’s basically a return to our old ways of eating. Mainly, totally avoid processed foods. But, no wonder Vicki asked if anyone else made it through the full 30 days. After, all, the program recommends that if you slip up on it you need to go back and start from day one again. That might help Vicki stay motivated and just stick with it the first time. Hopefully, she updates fans on her progress as time goes by.

Jane is a writer who started a small book publishing company. She wrote three books, one of them published by Domhan. jane also writes a for The Destination Seeker and Blasting News. Jane sometimes writes as Woryn Jay.